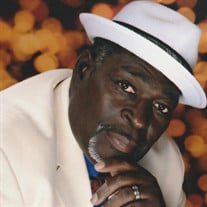 Snellville/Savannah - Deacon Zimbabwe "Zim" Brown, 65 husband of Mrs. Carolyn Brown entered eternal rest on Saturday, December 5, 2020 at Eastside Medical Center in Snellville, Georgia. Deacon Zimbabwe (Albert Daniel) Brown was born in Statesboro, GA on November 19, 1956 to the late Roy Brown Sr. and Annie Mae Stewart Brown. He grew up in Savannah, GA and attended Savannah Public Schools. In 1993, he met the love of his life Carolyn Reynolds. In 1996, they united in Holy Matrimony and became a loving blended family. By the grace of God, the family continuously flourished. Zim was a graduate of Sophronia M. Tompkins High School, Class of 1974 where he played cornerback on the football team and was a proud Wolverine. He attended Knoxville College in Tennessee where he joined the brotherhood of Phi Beta Sigma Fraternity developing lifelong friends. In 1996, he converted and dedicated his life to Christ and joined Bryant Temple Apostolic Church of the Living God. He faithfully served Christ as a brother in the church. He later moved to the Atlanta area and became a member of God’s True Worshippers Church in the Lord Jesus under the leadership of Bishop I.E. Bryant and Christ Anointed Apostolic Church of the Living God under the leadership of Elder Robert Reynolds; and continued to serve as a faithful brother. In 2009, he was ordained a deacon at Christ Anointed Church where he faithfully served until his health minimized some of his abilities. Zim was well-known and loved in his West Savannah community. For many years he inspired the young boys in West Savannah as a football coach for the West Savannah Whippers while winning a few championship games. As an active member in the community, he served as a Founder of the Annual Homeboy Reunion. For over 17 years, he joyfully worked at Candler Hospital as a physical therapist where he left memorable impressions on many patients. He later worked at the GA Department of Corrections and also provided private security details. He diligently and faithfully provided for his household until medical illnesses led to his disability and early retirement. As a sports fan, you could talk to him about many sports teams, past and present. He had an amazing ability to remember game details and statistics. He loved being with his friends and family. Zim never met a stranger; he was full of fun and laughter. After years of faithful service, the Lord called him home - from labor to rest. He is preceded in death by his parents, two brothers Clifford and Roy Jr. (Deborah), two sisters Barbara (Joe) and Annie Lizzie (George). He leaves to celebrate his life, his loving and devoted wife Carolyn; his caring son Stephen (Iesha); two gracious daughters Ashley and Courtney; three adorable grandchildren (Zylee, Zoey, and Zayden); three dedicated brothers Charles, Aaron (Angie), and Robert (Estelle); two amazing sisters JoAnn (Peter) and Margie (Harold); and a wonderful host of nieces, nephews, cousins, friends, and sisters and brothers in Christ. Social distancing and the wearing of a mask is required for the safety of everyone attending the service. Public Viewing: FRIDAY/ 11AM - 2PM & 5PM - 8PM

The family of Deacon Zimbabwe "Zim" Brown created this Life Tributes page to make it easy to share your memories.

Send flowers to the Brown family.