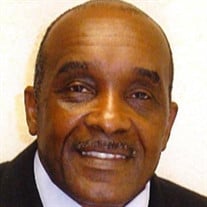 SAVANNAH - Reverend Ulysses Griffin, 66, entered eternal rest on Saturday, September 12, 2020. Ulysses Griffin was born on July 3, 1954, to the late Martha Birdell Greene-Price and the late Willie Griffin of Pembroke, Georgia. Ulysses had 6 brothers and 2 sisters, all preceded him in death. Ulysses attended the public schools of Bryan County. He obtained a graduate diploma from Pembroke High School in 1972, and collegiate degrees from Georgia Military College in 1984, and Savannah Technical College in 1985 majoring in Automotive Mechanics. He was baptized at the age of nine at Mill Creek Baptist Church, where he faithfully attends. In 1984, Ulysses was ordained a Deacon and in 1995, was ordained as a Minister at Mill Creek Baptist Church. A few years after serving in ministry, he was appointed and served as Pastor of Cypress Bay Baptist Church, Pembroke, GA for two blessed years. Ulysses taught himself to play music and sing, he used his talents at various churches throughout Georgia. Pastor Griffin started singing with the Mighty Gospel Travelers, the New Four Gospel Singers of Garnett, SC. and later, Missionary Gospel Singers. He was employed with the Bryan County Sheriff Department for five years and later at International Paper, formerly known as Union Camp. He served on Active Duty in the United States Army from 1974 to 1978, then joined the Army National Guard until retirement in 1996, with 22 years of service attaining the rank as Staff Sergeant. He leaves to cherish his memories, his loving and devoted wife, Edna Griffin; son, Ulysses “Lamont” Griffin, daughters, Ashley Latrice Irvin and Angel Denise Griffin, two grandchildren, Elijah Lamont Griffin and Madison Margarie Irvin, and a host of other family and friends.

The family of Rev. Ulysses Griffin created this Life Tributes page to make it easy to share your memories.

Send flowers to the Griffin family.