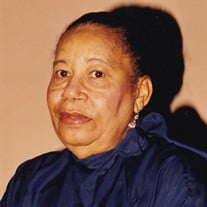 Hardeeville, SC - Tamma Octavious Brown Harvey entered into her final rest peacefully on January 21, 2016 at Hospice of Savannah, Georgia. She was preceded in death by her husband, Sansberry Harvey Sr. and her only daughter Evelyn Rita Harvey. Tamma, who was affectionately called “TB”, “Pluge” or “Sweetie” by her loving family, was born March 8, 1921 in Chesapeake, Virginia to Fannie Elliott Brown and Charlie Brown Sr. She was the sister of Everett Brown, Charlie Brown Jr, Georgia Carrington, Gladys Stewart, Ida Etheridge, Richie Cuffee, and Ezzel Brown Carrington all of whom preceded her in death. Tamma met her husband Sansberry in 1937. They were married in 1938 and made their home in Chesapeake, Virginia. They were blessed with the birth of six children. Upon the retirement of Sansberry from the Norfolk Naval Air Station, The Harveys relocated to Hardeeville, SC in 1979. The Harveys enjoyed their life together for 74 years. As Tamma’s health begin to decline, Sansberry and their oldest son Charles became full time caregivers. Sansberry later died in 2012. Tamma was a devoted wife and mother who was gifted with a spirit of entertaining and compassion to everyone with whom she came in contact. Her love of sewing, knitting, upholstery and ceramics was evident in the Harvey home. Tamma was an excellent cook and enjoyed preparing meals for family and visitors to her home. With a special love for children especially those in need, Sweetie served as a mother figure to community children in Chesapeake and Hardeeville. Some children she “fostered” in her home for a significant period of time. She also had a special affection for dogs and cats. Obtaining an education was one of Tamma’s most important goals. After her twins Everett and Evelyn, entered school, Tamma obtained her GED. She continued her studies to become a Licensed Practical Nurse and worked many years at Maryview Hospital. In addition, she was a member of the Board of Chesapeake General Hospital working with the Fundraising Committee. She also worked as a Private Duty Nurse in the Tidewater area. Tamma was a Licensed Welder and worked for Guile Steel and Works for many years. One of her other affiliations was serving as a volunteer with the Democratic National Party in Virginia. Tamma was a longtime active member of Bethel Baptist Church in Chesapeake. She and her husband joined St. Stephens AME Church in Hardeeville SC, during their residency there. Tamma leaves to cherish her memories a beloved sister, Beatrice Carrington, five sons, Rev. Charles Sansberry (Marian), Dr. Gary (Alice), Elliott (Valerie), Everett (Betty), 12 grandchildren, 13 great-grandchildren and 1 fifth generation grandchild, a host of nieces, nephews and other relatives.

Hardeeville, SC - Tamma Octavious Brown Harvey entered into her final rest peacefully on January 21, 2016 at Hospice of Savannah, Georgia. She was preceded in death by her husband, Sansberry Harvey Sr. and her only daughter Evelyn Rita Harvey. Tamma,... View Obituary & Service Information

The family of Mrs. Tamma Brown Harvey created this Life Tributes page to make it easy to share your memories.

Send flowers to the Harvey family.