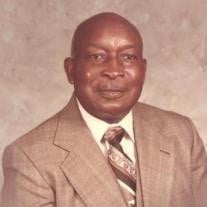 Deacon Sansberry Harvey, Sr., 94 entered eternal rest on November 19, 2012 at Coastal Carolina Hospital in Hardeeville, South Carolina. He was a native of Elizabeth City, N.C., but spent most of his adult life in the Chesapeake and Norfolk Virginia area. He was a product of the Pasquotank County, N.C. public school system. His work with the U.S. Government began in WWII as an employee at the Naval Amphibious Station, Portsmouth, VA. The Naval Ammunition Depot, and the Naval Shipyards. He retired from the Naval Air rework facility, Norfolk Naval Air Station after 38 years of dedicated service, receiving numerous awards and citations. Deacon Harvey was a faithful and devoted member of Bethel Baptist Church of Chesapeake VA where he served for a number of years as Sunday School Superintendent, and Financial Secretary. He was a long term member of its Board of Deacons. After several years of retirement, he and his devoted wife of 74 years decided to relocate to the low country of South Carolina settling in the town of Hardeeville. He later began a second career with the Jasper County Board of Public Education as a Janitorial Technician where he retired after 20 years of service. Following after his deeply held religious convictions, he united with the fellowship of St. Stephens AME Church of Hardeeville where he became a Trustee and member of the Senior Choir. He taught Sunday school, and he was class leader of Class II 6. He also traveled with the Devine Expression Gospel Singing Group. He was the consummate Husband, Father, Grandfather, Great Grand Father, and Great Great Grandfather as his whole life centered around his faith and his family. He was devoted to caring for his ailing wife Tamma for more than 30 years. He was committed to a strong work ethic, and high moral standards. He also had an affinity to the outdoors, he was an avid hunter and fisherman. He leaves behind a legacy of love and compassion and fond memories to be cherished by his devoted and loving wife, Tamma B. Harvey, Hardeeville, SC, Five Sons; Rev. Charles Eugene Harvey, Hardeeville, SC, Sansberry A. (Marian) Harvey, Fredericksburg, VA, Dr. Gary N. (Alice) Harvey, Savannah, Elliott D. (Valerie) Harvey, Ellicott City, MD, Pastor Everett (Betty) Harvey, Elizabeth City, NC,; Sister-in-Law; Beatrice Carrington, 14 Grandchildren, 12 Great Grandchildren, 1 great, great, grand child, a host of nieces, nephews, cousins, other relatives and friends. In lieu of flowers, make donations to the Frank & Hannah Owens Scholarship Foundation (tax deductible contributions) at Elizabeth City State University, 1704 Weeksville Rd, Elizabeth City, NC 27909

Deacon Sansberry Harvey, Sr., 94 entered eternal rest on November 19, 2012 at Coastal Carolina Hospital in Hardeeville, South Carolina. He was a native of Elizabeth City, N.C., but spent most of his adult life in the Chesapeake and Norfolk... View Obituary & Service Information

The family of Deacon Sansberry Harvey Sr. created this Life Tributes page to make it easy to share your memories.

Send flowers to the Harvey family.