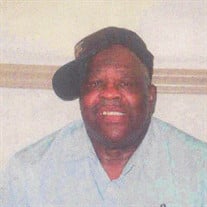 SAVANNAH - Rogers Lee “Heavy” Ruth, 80 of Savannah, Georgia and formerly of Ft. Lauderdale Florida entered eternal rest Monday, May 20, 2019 at Riverview Health and Rehabilitation Center. He resided in Savannah, Georgia for ten years. Rogers was born March 26, 1939 in Oliver, Georgia, to the Late John W. Ruth, and the Late Ida L. and Gilbert Simpson, Sr. He was educated in Effingham and Broward County public schools. During his teen years, he moved to Ft. Lauderdale to live with an Aunt and Uncle. After leaving school, he worked for the Florida Fruit and Vegetable Association. There, he rose to the position of Supervisor, of Fruit and Vegetable Collection and Distributions. He retired in 2000. During his off season from his work, he enjoyed Caddying for many well- known Golf Professionals. He had a deep passion for golf, playing cards, fishing and spending time with his friends “trash talking”. He was the widowed of Charles Etta Berry Ruth, the Love of his life who would precede him in death. This union lasted 30 years until her death on April 13, 2009. He is also preceded by a brother, Gilbert “Billy” Simpson, Jr. Rogers leaves to cherish his memories, sisters, Mary Simpson Taylor (Anthony), Peggy Simpson Mikell (Clyde) and Carolyn Simpson Blackshear (Rev. Jesse A.) all of Savannah, GA, one brother, Captain US Airforce Retired Willie Daughtry, Jr., Oakland, California, several nieces, nephews, many other relatives, and a beloved friend Mary McCray, and his Caregiver LaDonna January.

The family of Mr. Rogers Lee Ruth created this Life Tributes page to make it easy to share your memories.

Send flowers to the Ruth family.