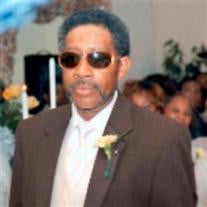 HARDEEVILLE, SC - Richard L. Prescott, Sr. age 60 died December 31, 2010 from injuries sustained in a House Fire. He was born in Bishopville, SC and attended the public schools of Lee County. Later, he attended Allen University. He was a US... View Obituary & Service Information

The family of Mr. Richard L. Prescott Sr. created this Life Tributes page to make it easy to share your memories.

Send flowers to the Prescott family.