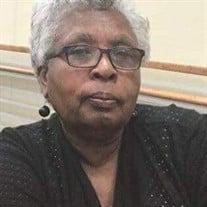 Savannah - Mrs. Patricia Ann Smith Kent, 70 entered eternal rest on Saturday, January 26, 2019 at Grady Memorial Hospital in Atlanta, Georgia. Patricia Ann (Smith) Kent was born in Claxton, Georgia on November 5, 1948 to Roosevelt and Amanda Smith; the fifth of 12 children. She graduated from Evans County High School and Savannah State College (now Savannah State University). While attending Savannah State she pledged Gamma Sigma Sigma Sorority and Sigma Gamma Rho Sorority, Inc. and was a member of the Home Economics Club. In 1971, she graduated from Savannah State with a degree in Food Nutrition Management. She received a T6 master’s degree in education from Cambridge College and completed doctoral courses in education at Walden University. Patricia worked for the Chatham County Board of Education as an educator for 35 years, retiring in 2014. She was a foster parent for over 15 years and received awards for her exemplary service. Additionally, she served the Southern District of the Association of the Church of God as a registrar for 20 years. Patricia leaves to treasure her memories: Bernard, son, Al and his wife Thurraya, Berneta and her husband, Winston; grandchildren, Malcolm, Matthias, Kent and Devon. Brothers, Roosevelt Jr. Joel, Eddie, George and Weldon, sisters, Carrie and Donna, and a goddaughter, Tre. Other relatives and friends. In lieu of flowers the family has requested that donations be made payable to “Savannah State University” and in the memo line, insert “in memory of Patricia Kent”. Donations may also be made online at give.savannahstate.edu/donate and select “Other” as the designation “in memory of Patricia Kent."

The family of Mrs. Patricia Ann Kent created this Life Tributes page to make it easy to share your memories.

Send flowers to the Kent family.