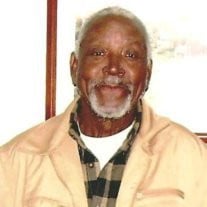 Mr. Leroy White, Sr &#8220;Buster&#8221; 86 died November 17, 2013. He was a native of South Carolina. At an early age his family moved to Chatham County where he was educated in the local schools. He was a member of Mt. Moriah Baptist Church... View Obituary & Service Information

The family of Mr. Leroy "Buster" White Sr. created this Life Tributes page to make it easy to share your memories.

Send flowers to the White family.