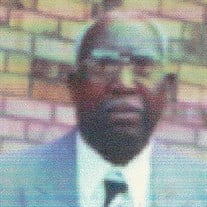 SAVANNAH - Elder Joseph D. Gibbons, Jr. age 88 entered eternal rest on Wednesday, November 23, 2016 at Saint Joseph's Hospital. He was born to the late Joseph Sr and Rita Thompson Gibbons on December 2, 1927 in Louisville, Georgia. He was educated in the public schools of Jefferson County. He spent most of his adult life in Savannah, Georgia. He was a member of the Liberty City Church of Christ where he served faithfully as Elder. He worked as a shipping clerk for Union Camp (now International Paper) for over forty years, retiring in 1990. He was a veteran of the U.S. Army serving from 1952 to 1954 in the Korean War. In addition to his parents, Elder Gibbons is preceded in death by his wife of forty-five years, Lucy Mae German Gibbons, and a son Glenn Gibbons. Elder Gibbons leaves to cherish his memories, one daughter, Debra Gibbons, and one son, Kenneth Gibbons, both of Savannah, Georgia; two sisters, Ethel Gibbons of Warner Robbins, GA and Sadie Franks of Nashville, TN; six sisters-in-law, two brothers in law, nieces, nephews, cousins, church family and many friends.

The family of Elder Joseph D Gibbons Jr created this Life Tributes page to make it easy to share your memories.

Send flowers to the Gibbons family.