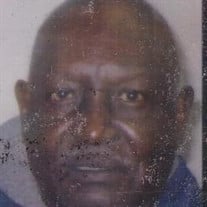 SAVANNAH - Mr. John Harrington, Jr of Savannah, Georgia, son of the late Mr. John Harrington, Sr. and Mrs. Trudie Butler Harrington, departed this earthly home Sunday, February 1, 2015, at Memorial Health University Medical Center. He was educated in the local schools and a graduate of the Florence Street School, Class of 1958. He retired from the City of Savannah as a truck driver, working in the Tree and Park Division from October 1972 to April 1995. He was of the Baptist faith and a veteran having served in the U.S. Army. He leaves to mourn his passing, a sister, Ethel Osborne of Savannah; niece, Ethel Elaine Osborne Turner, host of other nieces, nephews, cousins, great nieces, nephews, and friends. Funeral arrangements entrusted to Sexton-Hall Funeral Home, LLC, 5 Birkenhead Road, Port Wentworth, Georgia, 31407. We are just 5 blocks down from Imperial Sugar Refinery. (21 Coastal Hwy/GA 25)

The family of Mr. John Harrington Jr created this Life Tributes page to make it easy to share your memories.

Send flowers to the Harrington family.