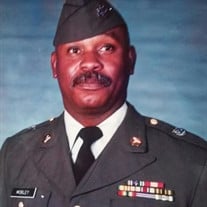 POOLER - Bro. Henry Mobley, age 67 passed away peacefully on May 24, 2016 at Memorial Health University Medical Center. He was born to the late Willie and Marjorie Coates Mobley on August 4, 1948 in Glennville, Georgia. He was the sixth child of nine children. He was educated in the public schools and a graduate of Tattnall County High School, Class of 1966. Henry served on active duty in the U.S. Army from 1971-1975. He continued to serve in the U.S. Army Reserve where he earned the rank of Sergeant First Class. He retired in 2007 after 30 years of service to his country. He received numerous awards and citations. He attended Savannah State College (now University) where he majored in Accounting. He later was employed by Coastal Canvas of Savannah, retiring in 2012 for over 30 years of service. At an early age he joined the Mt. Zion Baptist Church of Glennville. He would later be baptized into the membership of the Carver Village Church of Christ under the tutelage of Dr. David T. Chislom, who succeeded its long term minister the late John W. Green. Upon the establishment of the 50th Street Church Congregation of the Church of Christ (50th Street at Waters Ave). He placed membership with this congregation, where Judge Linnie L. Darden III serves as its ministering Evangelist. “Bro. Mobley” as he was affectionately known, served in “All” leadership capacities at the church. He is preceded in death by two sisters, Shirley Forrest, and Jacquelyn Mobley, one brother, Willie Emory Mobley who recently passed away on May 7, 2016. He leaves to cherish his memories, his devoted wife of 39 years, Alzenia Steeley Mobley, a son, Tommy (Tina) Steeley, four grandchildren, Tommy Jr., Taliesha, Tiyanna, and Timothy; one great grand son, Elijah Steeley all of Pooler, one brother, Tony J. Mobley of Savannah, four sisters, Irene (Nathaniel) Mayner of Claxton, Idonia (James) Butler, Savannah; JoAnn Bett of Jamaica, NY and Marie (Joseph) Harris of Orangeburg, SC., four sisters in law, Dianne Mobley of Detriot, MI, Rosemary Bulloch, Lillian (Marshall) Pringle and Annette (Napoleon) Grimes all of Savannah, a host of nieces, nephews, cousins, other relatives, church family and friends.

POOLER - Bro. Henry Mobley, age 67 passed away peacefully on May 24, 2016 at Memorial Health University Medical Center. He was born to the late Willie and Marjorie Coates Mobley on August 4, 1948 in Glennville, Georgia. He was the sixth child... View Obituary & Service Information

The family of Bro. Henry Mobley created this Life Tributes page to make it easy to share your memories.

Send flowers to the Mobley family.