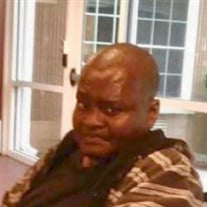 SAVANNAH - Mr. Frank Johnson, 60 passed away peacefully, Thursday, January 13, 2022 at Tattnall Healthcare Center. He was born on September 13, 1961 in Chatham County, GA to the late Mr. Frank Johnson Sr. and Mrs. Jannie Ruth Johnson. He was educated in the local schools and a graduate of Tompkins High School, Class of 1981. For many years he worked at Gadson Corner Store where many fell in love with his kind personality. He later worked at the Commissary on Hunter Army Airfield until his health begin to decline. He is preceded in death by two sisters and one brother: Sandra Walker, Cindy Johnson and Bobby Johnson. Frank was a faithful son, a compassionate father, a protective brother, and a loving grandfather, nephew, uncle and friend. He leaves to mourn his passing, two sons: Frank Tyre Johnson(Latodda) and Demetrius Gerelle Johnson (Lateasha); 11 grandchildren: Chris’Lynn, Frank Tyre Jr, Onnalajah, London, Chlo’e, Christopher, Ta’Liyah, Hailey, Nariyah, Demetrius II and Bobby. Frank is also survived by his two uncles: Ralph Deas (Yvonne) and John Smart (Corlis); one brother in law: Alphonso Walker; a caring and concerned nephew: Alphonso Walker Jr.; as well as a caring and supportive niece: one special niece Kimberly Sanders (William); a special friend Elizabeth Eady and a host of other relatives and friends. It is requested that a mask must be worn appropriately by all that are attending the services FOR THE SAFEFY OF EVERYONE, regardless of vaccination status.

The family of Mr. Frank Johnson created this Life Tributes page to make it easy to share your memories.

Send flowers to the Johnson family.