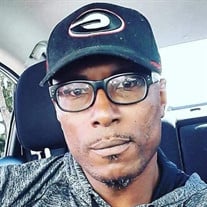 SAVANNAH - Mr. Edward James Deshawn Futch, 45 died Friday, October 8, 2021. He as born in Jesup, Georgia, and grew up in Savannah, Georgia. He attended the public schools and a graduate of Savannah High School, Class of 1994. He was a Athletic... View Obituary & Service Information

The family of Mr. Edward James Futch created this Life Tributes page to make it easy to share your memories.

Send flowers to the Futch family.