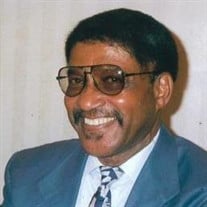 SAVANNAH - Mr. Charles Henry DeCosta, 86 entered eternal rest on Friday, December 20, 2019 at Memorial Health University Medical Center. Charles Henry DeCosta was born on November 22, 1933, in Coosawatchie South Carolina to Reverend York and Susan Farr DeCosta. He was the youngest of eighteen children. He received his formal education in the Jasper County School System and obtained an Associate in Arts Degree from Mt. San Antonio College in Los Angeles, California. Charles served eleven years on active duty in the Air Force from 1952 through 1963 and eleven and a half years in the Air Force Reserves for total of Twenty and half years. He retired as a Technical Sergeant in 1983. While serving in the Air Force, Charles received several medals and awards including first airman of the month and he was one of the first to be chosen by the installations group. Early in his adult life, he was baptized and became a member of Liberty City Church of Christ. Charles was joined in holy matrimony to Thomasine Hughley DeCosta, they were blessed with three children, Pam, Stacy, and Sterling. Charles is preceded in death by both parents, and sixteen siblings. He touched many lives and will greatly be missed. Charles leaves to cherish his memories, three children, Pam DeCosta of Norman, OK, Stacy DeCosta-Tracey of Aurora, CO, Sterling DeCosta (Tenaya) of Aurora, CO; one brother, James E. DeCosta of Fort Washington, MD, sister-in-law: Lilea DeCosta of Jacksonville, FL; grandchildren, Dominic, Sieana, Brooklyn, Sterling, Jr., and Kyndall, great-grand daughter, KaiLani; a host of nieces, nephews other relatives and friends.

The family of Mr. Charles Henry DeCosta created this Life Tributes page to make it easy to share your memories.

Send flowers to the DeCosta family.