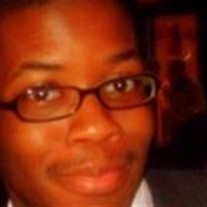 HINESVILLE - Mr. Britt Stewart age 30, entered eternal rest on Friday, August 14, 2015. He was born in Savannah, Georgia on November 27, 1984. As a 2003 honor graduate of Liberty County High School he participated in the Marching Band and helped compose music. He continued his formal education at Mercer University where he studied Music Composition. Britt was an avid lover of music and played several instruments including the piano, saxophone, baritone and many others. With a refined palette he was a connoisseur of fine dining & wines. He also had a love for travel which led him on many adventures with family & friends to various cities in the United States. He was impeccably stylish, creative and with a fashion sense always ahead of the season. He lived in Savannah, GA for several years before leaving for Oakland, CA to pursue a career in the Fine Arts. He is preceded in death by his father, Willie Barret, Jr. He is survived by his loving mother Diane Stewart of Hinesville, GA; four siblings, Chevas Stewart, Kyaun Stewart, Megan Stewart and Brice Stewart, all of Hinesville, GA; Five aunts, Patricia Mitchell (James) of Savannah, GA, Jeanette Hodnett (William) of Hinesville, GA, Sheila Stewart (Gary), Bernadette Stewart, and Georgia Mae Stewart, all of Atlanta, GA., Two uncles Anthony Stewart of Brunswick, GA and Michael Stewart of Riceboro, GA; One grandaunt Ruth Richardson of Riceboro, GA; one niece, Vanessa D. Stewart and a host of cousins, other relatives and friends.

HINESVILLE - Mr. Britt Stewart age 30, entered eternal rest on Friday, August 14, 2015. He was born in Savannah, Georgia on November 27, 1984. As a 2003 honor graduate of Liberty County High School he participated in the Marching Band and... View Obituary & Service Information

The family of Mr. Britt Stewart created this Life Tributes page to make it easy to share your memories.

Send flowers to the Stewart family.