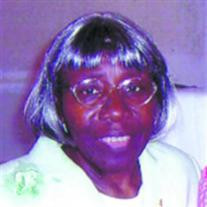 Pastor Bernice Garrett Broomfield - SAVANNAH - Pastor Bernice Garrett Broomfield 79, died September 25, 2009 at home after a short illness under the care of Odyssey Healthcare Professionals. She was a native of Ridgeland, SC but spent most of her adult life in Savannah. She was a faithful member of Prophecy Church on the Rock of the Living God where she served as pastor for many years. She was a former employee of Campbell Cleaners, Best Cleaners as a Shirt Presser, and Daycare Worker at Poogie Bear Day Care. She was also a receptionist at Vera's Alteration Shop. She is preceded in death by her husband, March Broomfield, and son, Rawleigh Garrett. Surviving are: Three Daughters: Vera Patterson Moss, Savannah, Burnette Battle Kluver, Orlando, FL, Joyce Battle, Savannah, Joann Battle Chisholm, Savannah, Denise Battle Washington, Savannah; One Son: Vero Battle, Jr., Savannah; One Sister: Edna Marie Garrett, Detroit, Michigan; 25 Grandchildren, 68 Grand Grandchildren, 14 Great Great Grandchildren, a host of nieces, nephews other relatives and friends. Public viewing will be at the funeral home Friday from 10:00 am until 2 pm and 3:00 pm at Prophecy Church on the Rock of the Living God, 23 Pritchard Street with Visitation beginning at 7:00 pm. She will repose at Greater Emmanuel Tabernacle, Saturday, 9:00 am until the hour of funeral.

The family of Pastor Bernice Broomfield created this Life Tributes page to make it easy to share your memories.

Send flowers to the Broomfield family.