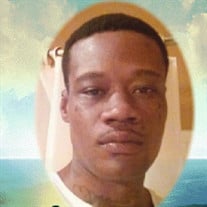 Savannah - Mr. Antonio Maurice Jenkins, Sr., 37 entered eternal rest on Monday, July 16, 2018 in Atlanta, GA. He was a native of Chatham County and educated in the public schools. He worked as a Contractor. He leaves to cherish his fond memories;... View Obituary & Service Information

The family of Mr. Antonio Maurice Jenkins Sr. created this Life Tributes page to make it easy to share your memories.

Send flowers to the Jenkins family.